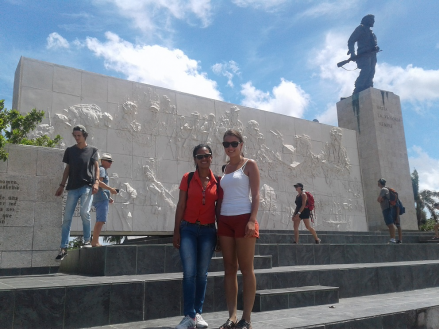 Today this is an attractive city for many reasons, among them its historical significance due to an important battle led by Ernesto Che Guevara. The battle hastened the end of the Fulgencio Batista regime. Because of it, Santa Clara is also known as Che´s city.
Site of interest:
Monument to Commander Ernesto Ché Guevara: Inaugurated to commemorate the anniversary of the battle of Santa Clara. The monument is a museum and mausoleum where, lie Che´s remains together with those revolutionaries that die fighting in Bolivia.
The Armored Train Monument: The monument is a memento of a relevant event near the end of Cuban insurrection against Batista dictatorship-The Battle of Santa Clara, led by Ché Guevara and his rebel army troops.
La Caridad Theater: The main Santa Clara theater was inaugurated in 1885.Its décor and others details of interior design are outstanding. At the present the magnificence building can be admire.