Tour with Valerie and Didier 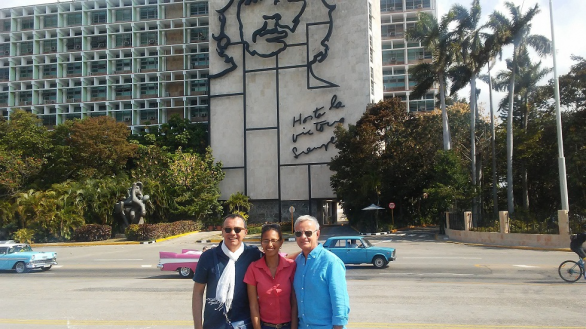 Tour Panorama around Old Havana.
Valerie and Didier are on holidays in Cuba.They have an appointment with Yasmin a local tour guide to make the tour around the historical center of Old Havana. At 9:30 in the morning we started the tour in the beautiful Old Havana and around all the fortresses appointed UNESCO World Heritage Site in 1982.
Beginning of the excursion, The Central Park .I show them the pretty hotels
and buildings renovered around such as Telegrafo Hotel built at the end of XXI century, one of the oldest in Latin America and Central Park hotel, 5 stars of luxury. On the Fraternity Park we begun to talk about The China town located in Havana founded after the huge Chinese emigration during XIX century, came 30 000 chinese to Cuba.-Unbelievable, I never thought to find in this
island a China town -Valerie said. We were close to the Capitol replica of The White house located in Washington DC,former seat of Cuban congress. I show them the colonial plazas founded during colonial period: Old Plaza,was the first one visited. Plaza founded in the end of XVI century .
Arms Plaza, the first one founded during colonial time. Plaza San Francisco De Asis and eventually the Cathedral Plaza for many the most attractive in the island.
We visited several monuments such Jose Martí statue located in front Revolution museum.Jose Martí is considered The National Hero because he led a huge legacy to the humanity ,culture and knowledge .He was a writer's  man believer that have education is the  only way to be free - I explained. They and me walked all Havana motivated without any problem.
At the end of the day Didier said:
I was delighted with this tour I enjoyed old Havana its worth it. I like his people.
Valerie added
Thank you Yasmin I enjoyed the tour around the old district and your company.