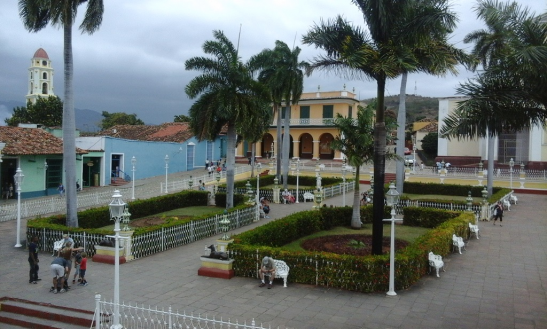 The so-called Museum City of Cuba, founded by the conquistador Diego Velasquez in 1514, flourished between 17th and 19th centuries thanks to sugar cane and slave trade. There are several buildings that show the splendor of the time, appointed Heritage Site by UNESCO in1988,along with famous Valle de los ingenious (Sugar Mill Valley).Trinidad offers a varied range of architectural details, ranging from artistic balconies to iron grates, stairs and multicolored facades.
Sites of interest:
Squares: Trinidad has many squares, large and small, among which you can find the Santa Ana, close to main Square, Jigue Square and Triple Cross, located at the end of the History Center, at the neighborhood known as El Calvario. The latter, with tree wooden crosses installed around 1826 in its center, became the final point of Catholic processions on the Holy Week and the Corpus, which gave the city a great importance since the very beginning of the colonization.
Valle de los ingenios (Sugar Mill Valley): Declared by UNESCO a World Heritage Site, it takes its name from the many sugar mills in the valley in the late 18thand early 19 th centuries. This great open-air museum exhibits 70 archaeological sites, including the ruins of sugar mills, parts of industrial machinery and utilitarian objects. The Manaca Iznaga community is one of the most interesting spots in the valley form the historical and architectural point of view.
Ancón Peninsula: Located about 10km south of Trinidad, the Ancón Peninsula has a beautiful namesake beach on its South coast. From a pier near the Ancon Hotel, boats take divers to the magnificent coral barrier reef.