Where to eat & drink 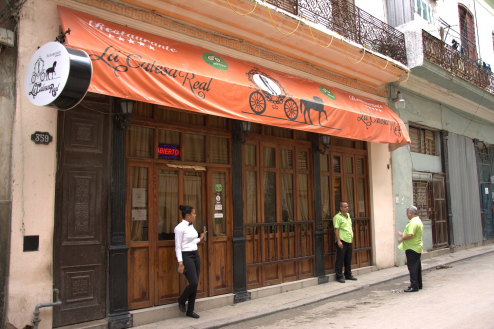 Cuba offers a mosaic of dishes as the result of the confluence of several cultures such as Spaniards, Africans, aboriginals and some small migratory that´s why aboriginal products, Spanish and Africans components, added elements from Chinese are part of Cuban cusine. Cuban gastronomy came into being through the fusion of all ingredients represented by traditional staples such as rice and beans.
Popular imagination named as “paladares” these small private restaurants that offer great dishes in atmospheres that generally reflect their owners’ good taste. The name originally came from a Brazilian TV soap opera in which its protagonist opens a restaurant under the name Paladar (Portuguese and Spanish for palate).These establishments can be found at private homes, in a manor´s garden, in apartment’s dining room or in a house´s main floor.
Some dishes very popular of the menu:
Ropa Vieja: Minced beef, particularly Havana style.
Congri o Moros y Cristianos: Rice and black beans.
Tostones: Fried green plantain.
Cerdo asado: typical roasted pork.